Our 2005 Edition of Might is Right has SOLD OUT!

Our 2005 edition of Might is Right has SOLD OUT. If you are interested in a copy, you may still find one used by searching on bookfinder.com. We also link to free copies of the 1896 edition, along with other Redbeard writings, on the right column of this site. Thank you for your patronage!

Dil Pickle Press is excited to present a new edition of Ragnar Redbeard’s Might Is Right! This new edition contains the most thorough history of “Ragnar Redbeard” and his book to date; it also features over 350 new footnotes and numerous in-text clarifications not found in any previous edition.

One would think that in our liberal, enlightened times a book dating from the Victorian Age would be viewed as a quaint curiosity. Not so Dr. Ragnar Redbeard’s notorious Might Is Right or the Survivial of the Fittest. It is hated and denounced as much today as when it first made the rounds of the Victorian Age’s elite and influential, which explains why the book is often featured on banned-book lists. Perhaps a 1905 ad for Might Is Right will give offer some insight:

This is a pitiless and appalling book by an author of extraordinary virility and rugged primeval force, whose sense perceptions borders on the supernatural.

Ten years ago private typewritten copies of this startling work sold in London and Berlin for $150. Since then the most powerful living minds have absorbed its teachings with satisfaction, but in guarded silence. Unquestionably it is the most pregnant and remarkable publication that has appeared in Christendom for 15 centuries. From its pages [Theodore] Roosevelt’s celebrated philosophy of ‘Strenuousness,’ ‘Race Suicide’ and ‘the Big Stick’ has been distilled and—diluted.

Prince Bismarck, Paul Kruger and President McKinley read it in manuscript before they died; and it has given nerve and decisiveness to the world-shaking aggressive activity of men like Cecil Rhodes, Von Buelow, Chamberlain, Elihu Root, Kaiser William, Abdul Hamid and Von Phleve. It has also had its effect on General Castro, Admiral Togo, Senator Tillman, Grand Duke Sergius, Lord Kitchener, General Trepoff, and their ablest adversaries. Indeed it has influenced public opinion throughout the whole world by changing the thoughts and opinions of national leaders and editors in the most wonderful way. It positively alters the course of mens lives. It has affected the destinies of nations, races, religions. It has annihilated many popular Ideals hitherto believed sacred and impregnable. Nevertheless it is written as interestingly as any romance.

Dr. Russell Wallace and Count Tolstoi criticize it in frank despair: and Bernard Shaw has written a drama (“Man & Superman”) with Redbeard’s thought as his theme: — and its power over the more intelligent followers of Marx, Lasalle, Jaures, Hearst, Bebel, Bernstein, is beyond calculation.

In fact this book is a veritable religious and political earthquake, marking the complete collapse of a false and depressing philosophy that has held sway for nearly 2,000 years. The thought in this book is positively startling. It thrills across the empires and republics like the wakening trump of a Warrior Archangel. It out Darwins Darwin; it out Spencers Spencer; and, compared to some of its splendid chapters the writings of Machiavelli are as the babble of a babe.

‘Nothing is true’ it declares, ‘nothing is permanent; all things are open to you; the world is to the Strong; struggle is forever; they may take who have the power; they can keep who CAN.’ The author proclaims himself a Messiah of Evolution; — a re-incarnate Odin, whose mission it is to journey from nation to nation, and city to city, teaching and preaching the ancient, true, heroic and masculine Evangel of valor and gold. You cannot buy ‘Might Is Right’ in more than half a dozen book stores of the world; nevertheless it has been translated into four modern languages; and over 120,000 copies have been sold in this country and in Europe. Orders are received from the most distant nations of the earth.

You never saw anything like it before in all your life. It condenses centuries of experience and whole libraries of current futilities and idolatries into half a dozen splendid epigrams, that ‘once read can never be forgotten.’ This is an unprecedented book — an extraordinary book — and YOU should read it — then read it again, and lend it to your friends. Get its meaning into your nature, and (if your spirit is not broken) it will do to you what it has done to others; it will open your eyes; it will make a new man of you; it will ennoble your every deed and thought; you will become intellectually as ‘one born again.’ It will hypnotize your very soul, and send you forth into this world of pitiless and ferocious combat a Conqueror and a King of Men. (Remember ‘Might Is Right’ is not for women — nor the immature.)

Surely you can afford to send 50¢ (2s) for a volume the like of which has not been printed or written (or carved in granite) since the days of JUPITER and THOR — of ODIN and MARS — the gods of eternal struggle, who are not dead but only sleeping.

The above ad proclaimed that the book was not for the “immature.” Perhaps the below excerpt from the 1896 edition of the book will allow the casual reader to understand why Ragnar Redbeard caused the Victorian leaders of his time to denounce his work as outrageous — why it is still denounced today, and why it still is not recommended for the “immature!”

“How is it that ‘men of light and leading’ hardly ever call in question the manufactured ‘moral codes,’ under which our once vigorous [people] is slowly and surely eating out its heart in peaceful inaction and laborious dry-rot?

Standard ‘moral principles’ are arbitrarily assumed by their orthodox apologist to be a fixed and unalterable quantity, and that to doubt the divine-rightness of these “principles” is treason and sacrilege. When the greatest thinkers of a [people] are incapable, or afraid to perform their manifest and logical function, it is scarcely to be wondered that average citizens are, also, somewhat unwilling to ‘risk life, fortune, and sacred honor’ for the overthrow of popularized ‘right and wrong’ concepts, that they know from bitter personal experience, are unworkable falsities. Although the average man feels in his heart that nearly all political and religious conventionalisms are dynamic deceits, yet how cautiously he avoids any open display of antagonism thereto? He has not the courage of his opinions. He is afraid to say openly what he thinks secretly. In other words he is living in a state of subjectiveness; of vassalage. He allows his brain to be dominated and held in bondage by the brain of another. From his infancy he has been deliberately subjected to a continuous external pressure, especially designed to coerce his understanding into strict accord with pre-arranged views of moral, political or religious ‘duty.’ He has not been permitted one moment of real mental liberty. He imbibed fraudulent conventionalisms with his mother’s milk. He listens to the most hideous lies being glorified in his presence as sublime truth. He hears falsehoods sung in swelling chorus. He hears them sounded on bugles of silver and brass. He hears them intoned by congregations of the faithful amid peals of sacred music, and the solemn roll of chanted prayer. Thus his mind is sterilized by authority before it has had a chance to mature. Thus youth is mentally castrated, that its natural vitality may be afterwards used up in the yoke of custom—which is the yoke of slavery. In the nursery, at school, and at college, plastic brain-pulp is deliberately forced into the pre-arranged mold. Everything that a corrupt civilization can do, is done to compress the growing intellect into unnatural channels. Thus the great mass of men who inhabit the world of to-day have no initiative, no originality or independence of thought, but are mere subjective individualities, who have never had the slightest voice in fashioning the ideals that they formally revere.

Although the average man has taken no part in manufacturing moral codes and statute laws, yet how he obeys them with dog-like submissiveness. He is trained to obedience, like oxen are broken to the yoke of their masters. He is a born thrall [slave] habituated from childhood to be governed by others.

Chinese civilization deliberately distorts its children’s feet by swathing them in bandages of silk and hoop-iron. Christian civilization crushes and cramps the minds of its youth by means of false philosophies, artificial moral codes and ironclad political creeds. Deleterious [destructive] sub-theories of good and evil are systematically injected into our natural literatures, and gradually (without serious obstruction) they crystallize themselves into cast iron formulas, infallible constitutions, will-o-the-wisp evangels and other deadly epidemics.”

One hundred and fifteen years is a long time for a book to be still causing shock, outrage and fear. It’s a long time for the powers-that-be to be banning it from schools, prisons, jails and nations. Might is Right by Ragnar Redbeard is a book that once read, will never be forgotten!

We use Pay Pal for online orders, which accepts all major credit cards. 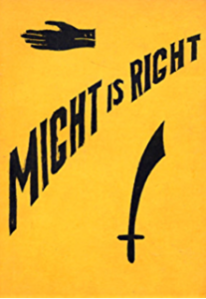 In the future, Dil Pickle Press plans to release a new special edition of Might is Right or The Survival of the Fittest By Ragnar Redbeard. You won’t want to miss this exciting new edition!

Follow our website by clicking the button on the upper right side, and we will keep you posted!

Dil Pickle Press is currently collecting and purchasing material including old editions of Might is Right published by the original Dil Pickle Press in Chicago. We are also looking for original articles, advertisements, newspaper clippings, or other material relating to Might is Right or Ragnar Redbeard from the author’s era. Photocopies of original material will also be considered. We are also buying copies of Ragnar’s Review, The Eagle and the Serpent, The Lion’s Paw, Hard Cash, and other Redbeard related journals. Also wanted are copies of Rival Caesars by Desmond Dilg, or other books or materials published by Thurland and Thurland of Chicago. If you have any information about these publications or originals, or copies for sale, please contact us using the convenient form on our contact page.